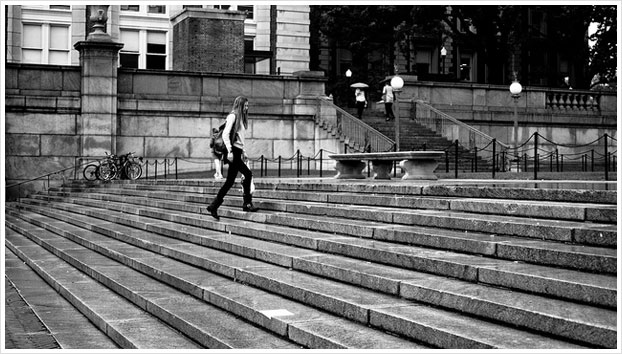 
When I was in high school I was a straight-A student. I was the kind of girl who got upset if she got a B. I remember complaining to my friends that I only had 93% in Geography when I thought I had 95% in the ninth grade. One of my friends gasped, feigning horror. “OH MY GOD, YOU ONLY HAVE A 93?! GUYS, CHELSEA ONLY HAS A 93,” he yelled sarcastically. Looking back now, I can see how lucky I was, but back then I felt like my grades were the only thing I had going for me. I was the smart one. That’s what I was known for. And then I became known for something else.

At 16, the vast majority of my friends shut me out for reasons that I can’t quite explain. I started dating one of the guys in our group, they all hated it and wanted us to break up – we did (a few times – they were not exactly conducive to romance) – and then just like that, all my friends were gone.

I didn’t like school already – although I was good at it, I had social anxiety (I didn’t know it at the time) and I couldn’t talk to anyone outside of my little group of friends from elementary school. Now that they were gone, it felt like my social anxiety had gone straight from 0 to 100 – I felt like everyone was always staring, whispering behind my back and judging me, because half the time they actually were. If I didn’t like school before, I hated it now. I had to sit through classes with my former friends, and though I moved seats to get away from them, I could still hear them talking about me at times. I had to watch them talk about all their exciting plans that I wasn’t a part of, at a louder volume than necessary because they were kind of obnoxious, just in general.

It was hard for me to focus in classes with people who hated my guts sitting a few feet away from me. I saw the school counsellor, who was very helpful – it was nice to have someone to talk to. But that didn’t change my reality, and by the end of grade 12 I might have failed without assistance from my counsellor and teachers. I had wanted to go to the University of Toronto, but I felt so scared of everything now, like the city would eat me alive. I ended up going to Brock University because it felt like the safer choice, but it was not for me.

Even my graduation wasn’t what I thought it would be. A lot of kids who have a hard time in high school have a fantastic time at graduation because they’re so happy to be out of there, but I had the opposite experience. I was the type of girl who dreamed about prom – I used to make sketches of what I wanted my dream dress to look like, and true to form I spent $1000 on a ballgown (maybe not the wisest decision, but it was the only thing I could do for myself). And it was a nice night; one of my best friends that I still had from out of town came down just to take me, so I didn’t have to go alone. But I didn’t get to ride in a limo and take beautiful pictures and go to an after party with everybody else. I wanted it to be the best day of my teenage life and I still felt excluded. Someone always had to remind me: You do not belong here. You are not good enough.

Still, I thought that things would get better in university. They had to. That was how it always went – the loser in high school gets super hot and then goes on to be crazy successful and everybody’s boss, a la Elle Woods (except with popularity instead of brains). It was a chance to start over – no one there knew who I was, and I never had to tell them. Unfortunately, I would be disappointed yet again.