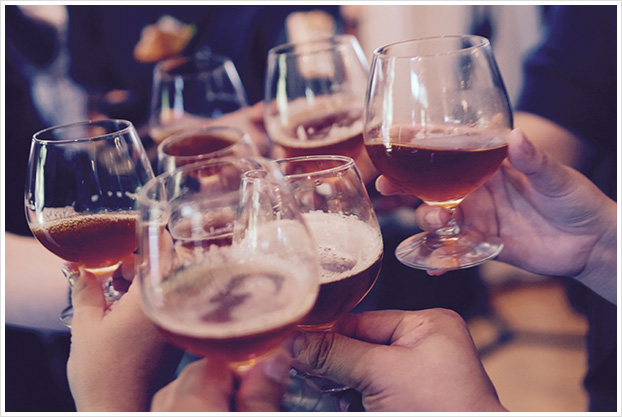 Drinking and students have been said to go together like nothing else. What else are university years for if not to give you a misspent youth which you can look back on with a combination of rue and pride in years to come? However, reports are beginning to leak out that more and more modern students are of the opinion that one’s university years are for studying rather than for partying. Is there any truth to this rumour? And, if so, why are drinking rates falling among the students of today?

Of course, there have always been some students who simply weren’t party animals – students who preferred to entertain themselves in other ways, or who didn’t like alcohol, or simply wanted to devote their time to a subject about which they were passionate. But these students used to be rather in the minority. Now, according to certain reports, they’re becoming more the norm. It’s not like there’s no party scene at universities any more. In fact, there’s still way too much of a party scene on many campuses. But it seems that students are not only getting a lot more self-aware about their drinking, but that a combination of factors are coming together to slowly push partying further down the priority list for many new students.

For a start, youth culture is once again starting to rebel against the constraints placed upon it by adult culture. And the way it’s doing so these days, bizarrely, looks a lot like conformity. While youth culture often thinks of itself as acting in opposition to adult culture, in fact the two feed off one another in a semi-symbiotic manner, swinging up and down like ends of a teeter-totter. Our parents’ generation was ordered by their parents to live sober lives of study and hard work. As a consequence, they spent their youths drinking and taking drugs (and using the influx of new wealth going around the West at that time to do so). The result of this is a generation which now works hard to market drink and the concept of the misspent youth to their own children. Countless movies glorify the hard-partying university lifestyle of our parents. While older generations may preach sensible sobriety with one hand, they nonetheless smile wryly at tales of student misdemeanors, often pitching in with reminiscences about their own drunken student exploits. So, just as the young British Victorians rebelled against the profligate debauchery of their Georgian forbears by emphasising a ‘sensible’ society, and just as the post-war generation rebelled against their parents’ ideas of righteous warfare by becoming peace-loving hippies, modern students are turning their backs on their parents’ idealised student-dom by insisting on doing things ‘right’. However, in order to produce such a societal sea change, big cultural shifts have to happen. And these should not be overlooked when considering the new, sober student.

Why are some students behaving so much more seriously than their parents did? It may be because the world has become a much more serious place for young people. Economic recession, and a world which feels increasingly unstable, is making many young people try hard to ‘lock down’ as much stability as they can. It’s easy to party while times are good, but when things are looking dicey, it makes more sense to get a bit more serious about things, and try to forge a stable future for oneself in any way that one can. War, the prospect of war, political upheavals, encroaching radicalism, collapsing economies, human displacement, ecological disaster…many young people feel beleaguered on all sides. Little wonder that today’s students are a more sober generation than their parents were.

Which brings us to self-awareness and the social conscience. Today’s up and coming students have grown up in a post-AIDS, post-climate change, post-credit crunch world. As such, they are accustomed to a degree of societal scrutiny, and accustomed to understanding that actions have consequences. This may not be true on an individual level – but it’s certainly noticeable on a cultural level. The outrage which has recently accompanied tales of drunken violence and assault on campuses has brought about a degree of self-awareness surrounding the typical ‘student lifestyle’ which never used to exist. Today’s students who get drunk and do some damage are likely to experience the kind of cultural kickback which never existed in their parents’ times (when such things would be dismissed with ‘boys will be boys’ and that kind of rhetoric). And nobody wants to wake up as social media’s next pariah.

Of course, plenty of students do still enjoy a party! If you’re a party animal, then there’s no reason why you shouldn’t indulge yourself (so long as you don’t hurt yourself or others while doing so!) But, if you don’t want to party, know that you’re not alone – and don’t feel pressured into drinking too much simply to ‘belong’. That kind of thing is way out of date!

This article was contributed by guest author Anne Green.