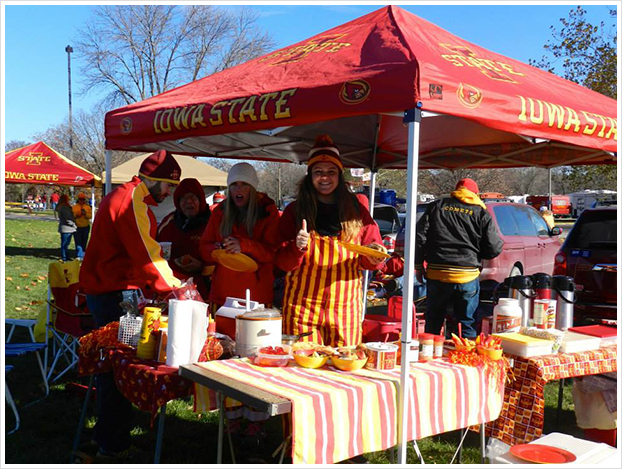 Every college and university has a unique culture, so student initiation into college life varies depending on where you go. From holding vigil over the graffiti rocks at Northwestern University to learning how to do the Gator chomp at the University of Florida to having a conditioned response to say “war eagle” at the mere mention of Auburn University, every school is different.
However, there is one rite of passage that is present in any college community. I’m not talking about matriculation, keg stands, or even graduation. No, the real rite of passage for any self-respecting college student is to go tailgating at least once during his or her college career.

If you are already a college student, I pray that you would not really be asking this question. But if you’re not sure, here’s a quick low-down on this crucial, collegiate activity. Tailgating is the party that happens in the parking lot before (and sometimes after) major events. Tailgating is most common at sports competitions, but many folks also like to tailgate at concerts and other types of festivals.

Typically, tailgaters get to the stadium or arena about four hours before the start of the game or concert. Beverages, finger food, and anything grilled are common fare among most tailgating circles. While tailgating, people show their support for the band or team that they are there to see. They also play yard games like the ever-popular cornhole and socialize with other passionate fans.

Anytime your school has a sporting event is a good time to tailgate. College football games are perhaps the most common tailgating events but other sports like basketball, baseball, soccer, and hockey are also known for their pre-game party atmosphere. Even if the weather is not that great, chances are there will still be diehard fans tailgating before the game. So throw on a poncho and boots or gloves and a scarf and get out and join them!

Now that you know the basics of tailgating, here are 14 tips to turn you into a college tailgating pro!

You can’t graduate college without attending at least one tailgating party. Bonus points if you host the gig. Get out there, socialize, meet new people and be part of a universal college experience.